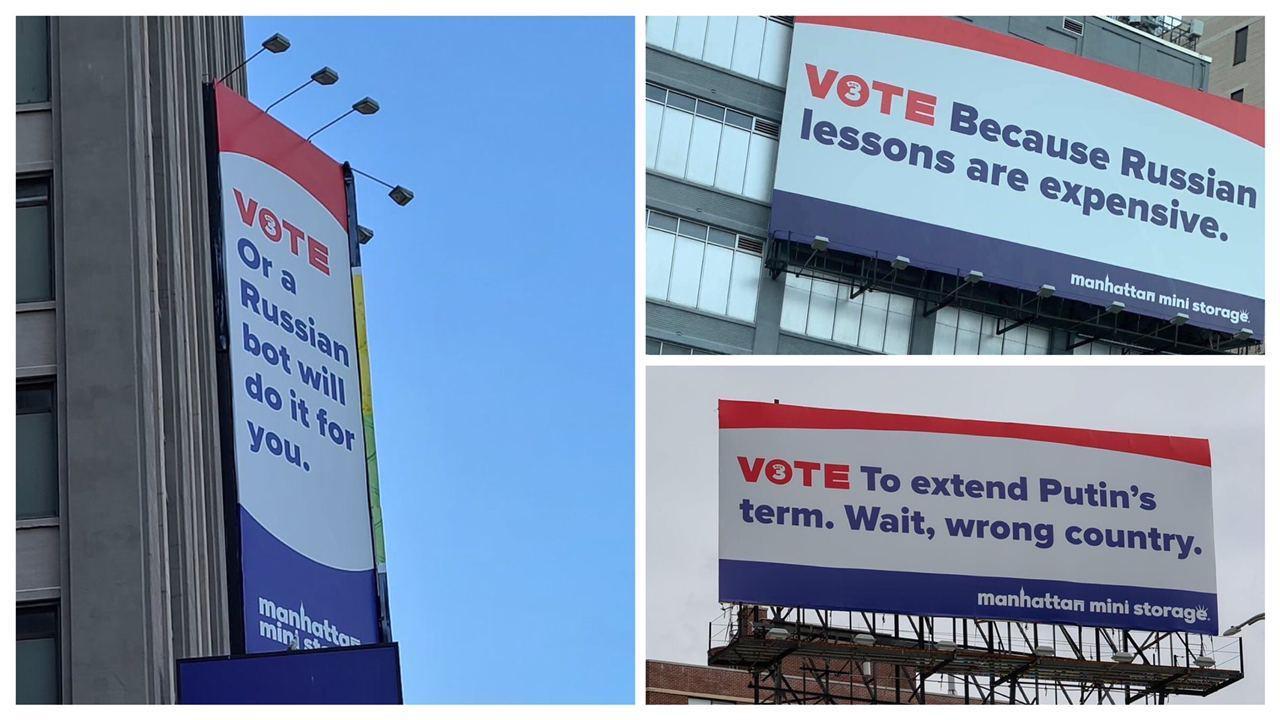 It was hard not to notice the peculiar billboard that went up in the heart of New York on August 31. “VOTE because Russian lessons are expensive,” it read.

Manhattan Mini Storage, the company that put it up, even uploaded a video to its Facebook page demonstrating the installation process.


According to data from two decades ago, the New York Tri-State area had a population of over 1.6 million Russian-Americans and some 600,000 of them lived in New York City. These numbers have likely only grown since.

Hence, it didn’t take long for the billboard to get noticed and start making rounds across community spaces on social media. Reactions were overwhelmingly negative with people writing comments such as:

Hmm…it’s not ok to call [Covid-19] the “Chinese virus,” but ok to hang such a billboard?

Why is this acceptable?

Disgusting, as if Russian bots could actually vote in the election instead of American citizens. Fear mongering and paranoia at its finest.

Can Russian New Yorkers file a class action lawsuit against these assholes for incitement of racism/xenophobia?

This is a hate speech against Russians. It should be taken down.

On September 22, three weeks after the first ad went up, the Congress of Russian Americans (CRA), a national non-profit organization established in 1973, answered the call to action demanded by the community at large by sending a letter to the storage company.

The letter, which was signed  by CRA Board Member and Attorney at Law Alexey V. Tarasov, included, among others, the following statements:

The display you put up for the public to see is grossly offensive, inasmuch as it disparages all people of Russian origin and all people that speak the Russian language. We call on you to remove the banner and never to display such messages in the future.

Your public statement, regardless of whether expressed on behalf of a third-party advertiser or on behalf of your commercial entity, has prompted outrage in the Russian-American community. Equally, it also calls into question your business’ adherence to laws banning discrimination in day-to-day operations.

In addition to committing never again to display a sign bearing an ethnically offensive message, we demand that you undertake these additional actions:

1. Within a reasonable timeframe, to institute written Anti-Discrimination/Implicit Bias policies and provide training to all of your staff on issues regarding diversity and anti-discrimination (to include national origin discrimination).

2. Within a reasonable timeframe, to provide to our office copies of your Anti-Discrimination/Implicit Bias policies.

With that, we will consider this matter closed. Should you be disinclined to follow through with the request outline above, we intend to pursue this matter further, up to and including the filing of a legal injunction request.

On September 27 the Russian Community Council, which is comprised of representatives of multiple organizations across the U.S., followed suit with their own letter, which read:

We, members of the Russian Community Council of the USA, a group that encompasses leaders of grassroots organizations from around the country, unequivocally condemn the Russophobia-laden political ads which you have displayed on billboards and banners around Manhattan.

The United States is home to millions of Russian Americans, many of whom find your messaging offensive and downright racist.

Your ads are a form of aggressive propaganda that under the guise of promoting voter turnout actually fuels ethnic profiling and animosity towards the members of our community.

We urge you to take immediate action by removing these ads and issuing a public statement addressing our concerns regarding racism and ethnic profiling.

Furthermore, should you choose to ignore these vital concerns, we reserve the right to pursue this matter further, including in the court of law.