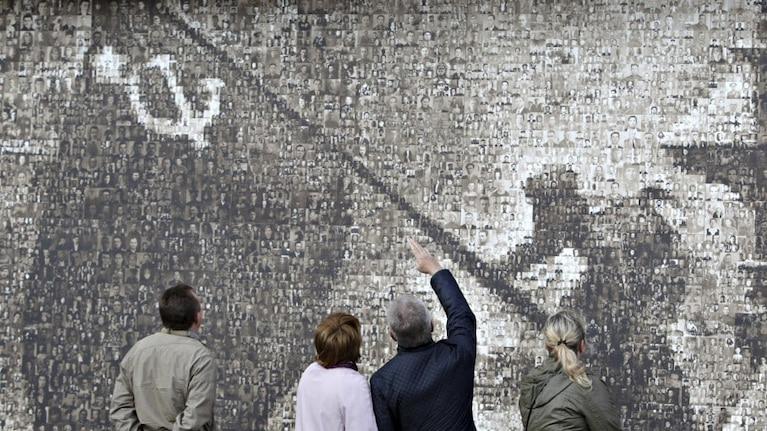 In the Western popular imagination -- particularly the American one -- World War II is a conflict we won. It was fought on the beaches of Normandy and Iwo Jima, through the rubble of recaptured French towns and capped by sepia-toned scenes of joy and young love in New York. It was a victory shaped by the steeliness of Gen. Dwight D. Eisenhower, the moral fiber of British Prime Minister Winston Churchill, and the awesome power of an atomic bomb.

But that narrative shifts dramatically when you go to Russia, where World War II is called the Great Patriotic War and is remembered in a vastly different light.

Starting in 1941, the Soviet Union bore the brunt of the Nazi war machine and played perhaps the most important role in the Allies' defeat of Hitler. By one calculation, for every single American soldier killed fighting the Germans, 80 Soviet soldiers died doing the same.

The Red Army was "the main engine of Nazism’s destruction," writes British historian and journalist Max Hastings in "Inferno: The World at War, 1939-1945." The Soviet Union paid the harshest price: though the numbers are not exact, an estimated 26 million Soviet citizens died during World War II, including as many as 11 million soldiers. At the same time, the Germans suffered three-quarters of their wartime losses fighting the Red Army.

"It was the Western Allies’ extreme good fortune that the Russians, and not themselves, paid almost the entire ‘butcher’s bill’ for [defeating Nazi Germany], accepting 95 per cent of the military casualties of the three major powers of the Grand Alliance," writes Hastings.

The epic battles that eventually rolled back the Nazi advance -- the brutal winter siege of Stalingrad, the clash of thousands of armored vehicles at Kursk (the biggest tank battle in history) -- had no parallel on the Western Front, where the Nazis committed fewer military assets. The savagery on display was also of a different degree than that experienced farther west.

Hitler viewed much of what's now Eastern Europe as a site for "lebensraum" -- living space for an expanding German empire and race. What that entailed was the horrifying, systematic attempt to depopulate whole swaths of the continent. This included the wholesale massacre of millions of European Jews, the majority of whom lived outside Germany's pre-war borders to the east. But millions of others were also killed, abused, dispossessed of their lands and left to starve.

"The Holocaust overshadows German plans that envisioned even more killing. Hitler wanted not only to eradicate the Jews; he wanted also to destroy Poland and the Soviet Union as states, exterminate their ruling classes, and kill tens of millions of Slavs," writes historian Timothy Snyder in "Bloodlands: Europe between Hitler and Stalin."

By 1943, the Soviet Union had already lost some 5 million soldiers and two-thirds of its industrial capacity to the Nazi advance. That it was yet able to turn back the German invasion is testament to the courage of the Soviet war effort. But it came at a shocking price.

In his memoirs, Eisenhower was appalled by the extent of the carnage:

When we flew into Russia, in 1945, I did not see a house standing between the western borders of the country and the area around Moscow. Through this overrun region, Marshal Zhukov told me, so many numbers of women, children and old men had been killed that the Russian Government would never be able to estimate the total.


By some accounts, 60 percent of Soviet households lost a member of their nuclear family. For Russia's neighbors, it's hard to separate the Soviet triumph from the decades of Cold War domination that followed. But we shouldn't forget how the Soviets won World War II in Europe.
Ishaan Tharoor